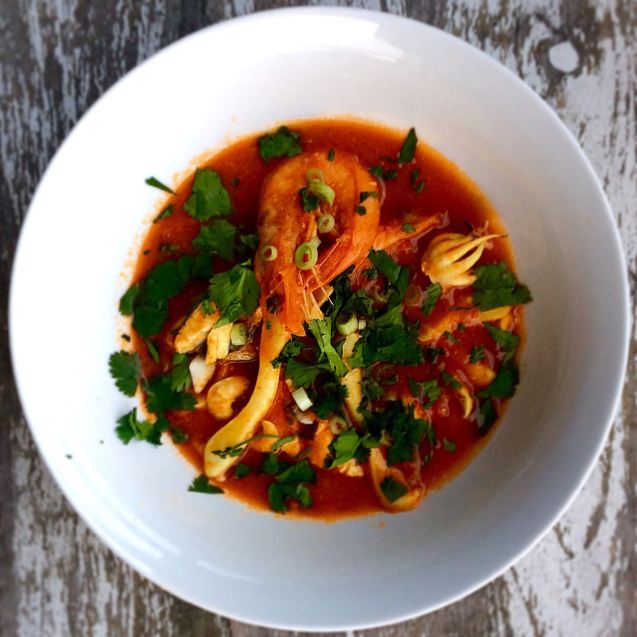 Ok here is the thing: I love spending my Sunday evenings relaxing on the couch with a glass of Bordeaux wine and watching Masterchef Australia. It’s my little guilty pleasure 😉 And so the other day, I was watching one (very exciting) immunity challenge episode in which the talented young Chef Benjamin Cooper created his own version of a Brazilian seafood stew (called Moqueca) with lots of seafood and Brussels sprouts!

It simply looked amazing: vibrant in colour, fresh and healthy but in the same time creamy and comforting. I was literally drooling in front of my computer screen … hahaha… Couple of days later I found myself looking up online how to make the seafood stew, crossing recipes, making ingredients lists…

I always find interesting to see how a dish is prepared in different part of the world. It seems like every culture with a coastline has their own version of a seafood stew. We French have Bouillabaisse, the Portuguese Bacalhoada, Italians have Cioppino, and in New England the famous Clams Chowder. In Brazil they make Moqueca with fish, onions, garlic, tomatoes, cilantro, and coconut milk. I love making fish stew, but had never thought to use a base of coconut milk!

A few words about this recipe:

– First, it’s easy. As exotic as it may sound, you probably have most of the ingredients already in your pantry (you’ll want to get fresh seafood though), and with prep, making rice, the total time involved is less than an hour.

– From what I have read true Moqueca is made with a fish caught off the coast of northern Brazil. Since I do not live in Brazil (would love to go for a trip though, Den if you hear me…;) I used a firm white fish and you will want to do the same so that it doesn’t break in the stew in tiny pieces. I used cod for this batch. You can also add gambas or tiger prawns or other shell fish to this stew. Palm oil is traditionally used in making Moqueca, but I didn’t have any at home, so I used olive oil.

– Finally to any Brazilians who might be reading this blog (Olé Brasil!) if you have a favorite Moqueca recipe, please tell me about it in the comments.

In a large bowl combine the lime juice, salt, pepper, garlic, gambas or prawns, squid and fish and leave to marinate for about 30 mins in the fridge.

Heat a large dutch oven over medium heat and add 2tbsp of olive oil. Once the oil has heated add in the onion, red bell pepper, garlic and bay leaf and cook the vegetables for about 6 mins, stirring occasionally.

Increase heat to medium high and add the can of diced tomatoes and cook for an additional 2 mins.

Now add in the chicken broth, bring to boil and then reduce the heat and leave to simmer for about 10 mins.

Put back your vegetable mixture in the pan if needed and add in the coconut milk and cayenne pepper.

Bring to boil over medium high heat and cook for 3 mins. Now mix in the marinated fish.

Cover the pot and cook for 3 to 5 mins or until seafood is done.

Serve in bowls and top with fresh chopped cilantro and rice or flat bread.

If you’re in the mood for a Brazilian pairing I would drop the wine here and go as the Brazilians do themselves and drink caipirinhas or beer with that gorgeous plate of seafood. Otherwise given its resemblance to Provençal bouillabaisse, Boulud poured a Provençal rosé would be a great choice. You could also go for a white Argentinian Torrontes or a fresh young Viognier.

It has been a while since I took Raphaëlle to eat in a restaurant. At least twice a month she asks me when will be the next time I take her out. And at least twice a month I explain her that I think that what we eat in restaurants (yes, even the pretty and expensive ones) is less good than what we eat at home. The dishes at home look beautiful and are filled with flavour. But she still want to go out to eat in restaurants. Women..

The seafood dish was a dish as you would expect in a great restaurant. Rarely have I eaten squid that was so tenderly cooked and the creamy sauce binded the different seafood together. It felt like a complete stew: balanced as it should be. Again another reason to eat indoors.

petites confitures maison
Dimanche aprèm
les recettes de maman ❤️
back from Rome with a suitcase full of the best Italian’s products makes for a great breakfast 🍳
%d bloggers like this: